The Act is designed to primarily attract to Puerto Rico high net worth individuals, empty nesters, retirees who currently relocate to other States and investors from U.S. and other countries. The Act provides the following benefits to new Puerto Rico bona-fide residents on qualified investments:

For example, if stock from a publicly traded
company is acquired by a U.S. resident in 2006 for $40 and is
worth $100 just before moving to Puerto Rico in 2012, and
then it is sold by the Puerto Rico resident on 2018 for $200, the
individual will be subject to income taxes for the gain realized
on the sale as follows:

If the stock acquired by the U.S. resident in Example
1 is sold by the Puerto Rico resident on 2023 for $200, the
individual will be subject to income taxes for the gain realized
on the sale as follows: 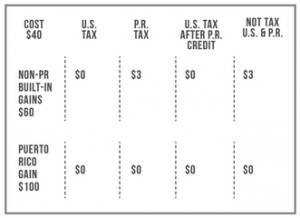 To benefit from the Act, the individual investor needs to submit
an application with the Office of Industrial Tax Exemption
of Puerto Rico to obtain a tax exemption decree, which will
provide full detail of tax rates and conditions mandated
by the Act and will be considered a contract between the
Government of Puerto Rico and the individual investor.

Once the individual investor obtains the tax exemption decree, the
benefits granted will be secured during the term of the decree,
irrespective of any changes in the applicable Puerto Rico tax
laws. The term of the decree will be until December 31, 2035.